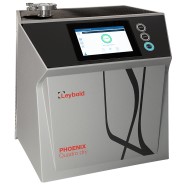 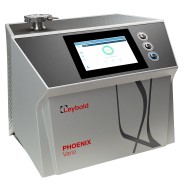 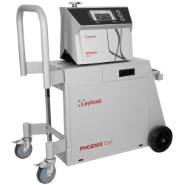 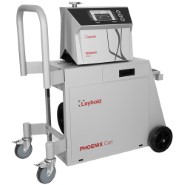 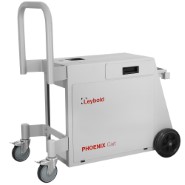 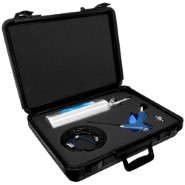 Ideal Vacuum PREMIUM Helium Spray Kit, Used for Helium Leak Detectors. Includes a Spray Probe Gun, Small Aluminum High Pressure Cylinder, Precise Regulator, Adapter for Easy Refill, 10 ft. Hose with Quick connectors, and Sturdy Carrying Case. Ideal Vacuum PREMIUM Helium Spray Probe Kit is rugged and easy to use, the Helium Spray Probe is designed for use in maintenance or production leak detection applications. This PREMIUM helium spray probe kit includes a lightweight, aluminum, refillable high pressure cylinder with an adjustable precise output regulator. The helium flow rate can be adjusted between 0 and 0.1 Standard Liters Per Minute (SLPM). The reservoir cylinder is 3 diameter x 11 tall, with a volume of 1000 cc, and a burst pressure rating of 1800 psi. We recommend it be filled to no more than 1500 psig. DO NOT EXCEED RESERVOIR''S RATED PRESSURE. This small, convenient helium spray probe kit can be taken to any location without needing a large, heavy, helium tank. The kit includes a 10 cylinder-to-spray gun hose with C10 quick connectors. Also included are a straight stainless steel 4 probe tip, a 9 flexible probe tip, and a refilling adapter, all packaged in a sturdy, foam lined carrying case. For Proper Use - Download Helium Spray Probe Gun Users Guide.pdf on DOWNLOADS section. 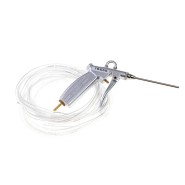 Edwards & Leybold Helium Spray Gun for ELD500, Phoenix Quardo & Vario Helium Leak Detectors, PN 16555 This is a Edwards & Leybold Helium Spray Gun for Phoenix Quardo & Vario Helium Leak Detectors. It allows precision leak detection and control of helium flow which is essential in effective leak detection. Enables the user to pinpoint the leak in vacuum mode simple operation. We offer a large variety of vacuum fittings, hoses, vacuum gauges, sensors/transducers and accessories sold separately on this website. Call us for a quote (505) 872-0037. For a complete instruction manual on the Edwards ELD500 see Downloads to the left. 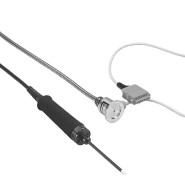 Leybold Helium Sample Sniffer Probe SL 300 for Phoenix L300i or Quadro Helium Leak Detector Leybold Part Number 252003These SL 300 sniffer probes are used with the Leybold Phoenix L300i or Quadro helium leak detector in sniffing mode. Used for leak detection in which a helium over pressure is present. Besides accurate pinpointing of leaks it is also possible to determine the leak rate of the escaping helium. Sniffer line connects directly to test connection. Gives status LED red or green, go/no-go indications. To ZERO push button, easy filter removable, very fast response and a low detection limit of <1x10-7 mbar x 1 x s-1. Rigid sniffer tip 120 mm in a very rugged industrial design. Dimensions: 4 meters long, straight handle with red or green LED for go/no-go indication Rigid sniffer tip 120 mm Helium Leak Testing BasicsHelium mass spectrometry, or helium leak testing, is a highly precise means of leak detection. This technology was first developed for the Manhattan Project during World War II to locate extremely small leaks in the gas diffusion process.At the heart of helium leak testing is a complex piece of equipment called a helium mass spectrometer. Quite simply, this machine is used to analyze air samples (which are introduced into the machine via vacuum pumps) and provides a quantitative measurement of the amount of helium present in the sample. In practice, a "leak," is identified by a rise in the level of helium being analyzed by the machine.Helium leak testing can identify extremely small leaks. For example, our equipment can detect a leak so small that it would emit just two cubic centimeters of helium (or the amount equal to two sugar cubes) in 320 years. While very few applications require this level of precision, this example serves to highlight the accuracy possible with this process.While helium leak detection may appear to be a simple procedure, the process involves a combination of both art and science. The user must ensure the equipment is functioning properly and the process is highly dependant upon the users experience. Consider this analogy: while anyone with enough money can buy an airplane, learning how to fly one takes a lot of practice. The same is true with helium leak detectionmake sure your "pilot" knows how to fly.Why Is Helium Superior?While many gases are used in leak detection, heliums qualities provide for superior testing. Having an AMU (Atomic Mass Unit) of only 4, helium is the lightest inert gas. Only hydrogen, with an AMU of 2, is lighter than helium. However, due the hydrogens explosive potential it is rarely used.Additional reasons why helium is a superior tracer gas: Only modestly present in the atmosphere (roughly 5 parts per million) Flows through cracks 2.7x faster than air Nontoxic Nondestructive Nonexplosive Inexpensive User Friendly Due to these attributes, and its high sensitivity, helium leak testing has gained broad acceptance in a wide range of leak testing applications. Helium Leak Testings two primary testing modes are spray probe and sniffer probe.Two primary methods of helium leak testing: Spray Probe Sniffer Probe The choice between these two modes is based on both the size of the system being tested, as well as, the level of sensitivity required.Spray Probe: Provides Maximum SensitivityFor this technique, the leak detector is hooked directly to the system under test and the inside of the system is evacuated. Once an acceptable vacuum is achieved, helium is sprayed discreetly on the outside of the system, with particular attention being paid to any suspect locations. Any leaks in the system, including defective welds (caused by cracks, pin holes, incomplete welds, porosity, etc.), flawed or missing gaskets, leaks due to loose clamps, or any other defect will allow helium to pass and be readily detected by the machine. The source of any leaks can then be accurately pinpointed and repaired.The spray probe process is used to achieve the highest level of sensitivity. The equipment being used dictates the maximum sensitivity achievable; in Jurva Leak Testings case it is 2x10-10 std cc/sec. This technique does require that the system being tested is relatively leak tight prior to testing, as an ample vacuum is required for testing. However, by using special throttling devices a gross test can typically be performed. The gross test should eliminate any major leaks, permitting the use of increased sensitivity.The following are examples of systems that we test using the spray probe technique: A-bar furnaces E-beam systems Laser systems Metal deposition equipment Distillation systems Vacuum systems Sniffer ProbeFor this technique, helium is purged throughout the inside of system being tested. Due to the innate properties of helium it readily migrates throughout the system and in its attempt to escape penetrates any imperfections, including: defective welds (caused by cracks, pin holes, incomplete welds, porosity, etc.), flawed or missing gaskets, leaks due to loose clamps, or any other defect. The systems exterior is then scanned by using a probe attached to the leak tester. Any leaks will result in an increased level of helium nearest the source and be readily detected. Leak sources can then be pinpointed, providing the opportunity for immediate repair and retest.Unlike the spray probe technique, this process is very flexible and can be adapted to meet the needs of any virtually any system in which helium can be injected. There is no practical size limitation. The sniffer probe technique is not as sensitive as the spray probe process, however, due to the amount of helium present in the air (approximately 5 ppm). The maximum sensitivity achievable under this procedure is approximately 1x10-6 std cc/sec. Nevertheless, this process is vastly superior to other traditional leak testing methods, such as: bubble testing, acoustic emission, liquid penetrant or vacuum box testing.The following list is an example of systems that Jurva Leak Testing has tested using the sniffer probe process: Storage tanks (both above ground and below) Floating roofs Underground pipelines Underground cables Aseptic systems (flash coolers, heat exchangers, fillers, etc.) Any vessel/line or system that can be pressurized 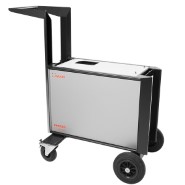 Cart for Leybold Phoenix L300i Leak DetectorCart Only, Leak Detector Sold Separately This Cart is designed for an Leybold Phoenix L300i Leak Detector ONLY. The Leybold Phoenix L300i package is also offered here on our website includes the following items: Phoenix L300i Leak Detector, 1PH 115V, with internal Dry Diaphragm backing pump and TW70H turbo pump, Leybold pn: 251001V01 Cart 300  hand cart for Phoenix L300i, Leybold pn: 252005 The minimum detectable leak rate available for this unit in vacuum mode is <5x10-12mbar l/s and in sniffer mode <1x10-7mbar l/s. The inlet flange on the Phoenix L300i is DN25KF and it comes standard with a TL7 internal calibrated leak and certificate of calibration. This helium leak detector can be used as a portable or benchtop unit. For the ultimate control and operation of the machine an iPad is recommended and offered as an optional accessory. The Phoenix L300i helium leak detector offers new features such as: Quick Start up (< 2 minutes) Extremely fast response Different reporting options  based on particular application needs Optional barcode scanner to increase working speed Auto Calibration High Sensitivity Detectable Masses of 2, 3 and 4 Flexible application areas Maximum mobility due to wireless remote control RC 310 or iPad Modular design makes this unit very service friendly 10 languages available (iPad Version: only German, English) Most robust and reliable ion source (extended warranty time) Please see below in our Related section for additional accessories that may benefit your vacuum applications and needs. We offer a large variety of vacuum fittings, hoses, vacuum gauges, sensors/transducers and accessories sold separately on this website. Call us for a quote (505) 872-0037. For instruction manuals or data sheets please see the Available Download PDF''s Below. 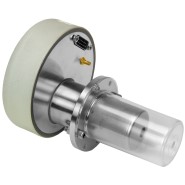 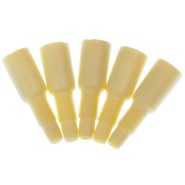 Leybold Sniffer Probe Capillary Filter for Phoenix SL300, L300i, Helium Leak Detector, Pack of 5 PN: 20003501 This is a 5 pack of capillary filters for the leybold SL300 and L300i helium leak detector probe. We carry other parts for these detectors. 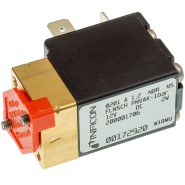 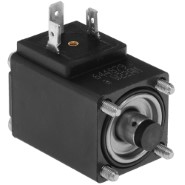 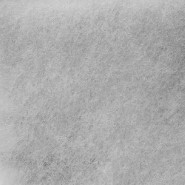 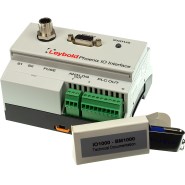 Leybold I/0 Phoenix interface module. Leybold pn: 252211V02 Leybold Phoenix I/O interface module I/O 1000. A device that is an interface between the leak detector Phoenix Quadro and an external controller. Instruction .pdf for use can be downloaded at Downloads to the side.