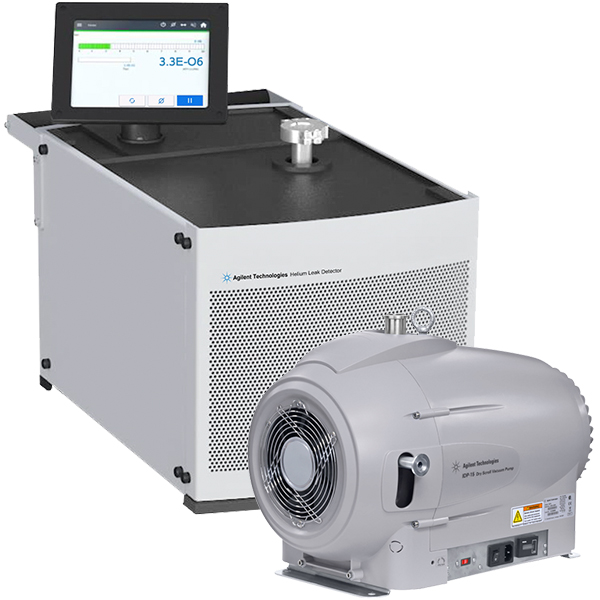 The new HLD Bench Leak Detector, with IDP-15 Scroll Pump combines the simplicity of operation with advanced system intelligence to give you easy access to powerful helium leak testing capabilities with hand held remote control (optional). This multi-function leak detector has single CPU architecture and depending on the model can leak check small parts to large vacuum chambers. The New HLD Leak Detector has a large color touch screen with two home screens and 180 degrees rotation. The setup is 4 times easier than competitive models and has the ability to save numerous "recipes" for quick recall. The unit setup has six pre-programmed key applications for both new and experienced users. They are: Sniffing, Spray Method, High Sensitivity, Auto Sequencer, PPM Testing and Split Flow.

This Leak detector comes in many configurations with rotary vane or dry scroll vacuum pumps (see list and technical specs below) Sold as Brand New and comes with Agilent Varian Manufacture Warranty. For complete specifications and application - download the Operating Manual PDF below under (AVAILABLE DOWNLOADS).

While helium leak detection may appear to be a simple procedure, the process involves a combination of both art and science. The user must ensure the equipment is functioning properly and the process is highly dependent upon the users experience. Consider this analogy: while anyone with enough money can buy an airplane, learning how to fly one takes a lot of practice. The same is true with helium leak detectionmake sure your "pilot" knows how to fly.


Due to these attributes, and its high sensitivity, helium leak testing has gained broad acceptance in a wide range of leak testing applications. Helium Leak Testings two primary testing modes while there are a variety of testing procedures, in general there are:

The spray probe process is used to achieve the highest level of sensitivity. The equipment being used dictates the maximum sensitivity achievable; in Jurva Leak Testings case it is 2x10-10 std cc/sec. This technique does require that the system being tested is relatively leak tight prior to testing, as an ample vacuum is required for testing. However, by using special throttling devices a gross test can typically be performed. The gross test should eliminate any major leaks, permitting the use of increased sensitivity.

Specialized Testing Techniques
In addition to the two primary testing procedures listed above, there are a number of more specialized techniques that can be utilized. Among these techniques, we routinely employ bagging or hooding and bombing. (content nicely written by Jurva Leak Testing, http://www.jurvaleaktesting.com/HeliumLeakTesting.html)